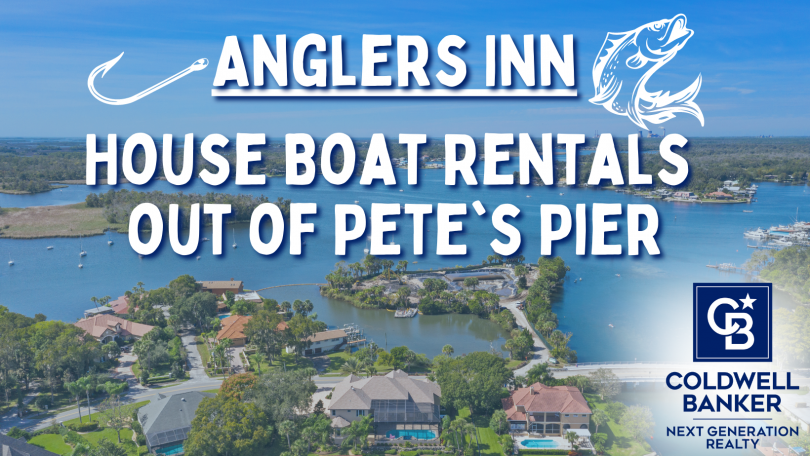 A floating 5-star resort is making its way to Crystal River’s Kings Bay. A 5-vessel fleet of remodeled 59-foot Gibson houseboats have just arrived to Pete’s Pier Marina after a 3,200-mile haul. The marina will become the first U.S. destination for Anglers Inn International, which hosts luxury fishing excursions at two Mexican lakes, and on the Amazon River in Brazil.

Anglers Inn founder and owner, Billy Chapman states “I’m so excited because I know Crystal River is in the top to have some of the best fishing in Florida, so Anglers Inn is very excited for Boe’s invite to come in and put an Anglers Inn at Pete’s Pier”

After a few refurbishments, the water bound lodge plans on having customers in the houseboats by the first of November. These rentals will be available weekly, with all marketing being done through Pete’s Pier.

Chapman founded Anglers Inn 40 years ago and has been growing it into the company that it is today. He says that his houseboats are going to help drive the business and promote the destination because “that’s what it’s all about”. “We’re looking to do things in a five-star way, because that’s what I’m known for.” states Billy.

Starting off 4 decades ago, introducing U.S anglers to the Amazonian fisheries, Billy Chapman became a fishing hall of fame outfitter. “I pioneered the Amazon, I lived in the jungle from 22 to 32 (years old), and I learned peacock bass,” he said. “I was the first American to bring Americans to get to know the jungle, and that’s how I grew my business.”

Chapman knew Crystal River would be the perfect destination due to its surroundings. Not only does Kings Bay offer swimming, kayaking and boating but it also offers year-round bounties of fishing. Not to mention seasons for, both, manatees and scallops. There is something for everybody and is a family-friendly vacation destination.

This business venture started in Idaho, where uncooperative weather persuaded Chapman to move his houseboat operation to The Nature Coast. “I changed the whole business plan and brought it to Florida because I wanted an Anglers Inn in the United States,” he said. “I like to feel I picked one the best attention-to-detail services for my tours here in Crystal River so that’s why we’re teaming up.”

The fun doesn’t stop there. Billy has another goal to also run Anglers University out of Pete’s Pier. The program is to help teach vacationers the basics of fishing and fishing safety with classes on the water!

Pete’s Pier’s website can be reached by visiting petespier.com.